The Oldest and Newest Thing in Blogging

Dave Winer just release a new project called Drummer. Drummer is an outliner that has been especially adapted to doing blogging. If you are into either outliners or blogs, this is an interesting development. Dave is probably the oldest name in outline, blogging, and podcasting applications. You can check out his Wikipedia page for a full history.

I’m not very familiar with the history of outliners and blogging, but I do know in certain circles, especially the Mac community, early blogs were based on outlines. Over the years it seems like those two have drifted apart into their own applications and communities.

I stumbled into the blogging world long before I had heard of blogs. In the very early 2000’s personal blogs weren’t very well known, but sites like Slashdot were. Slashdot was what we would now refer to as a link blog. A link blog is one that links to external articles and provides commentary about them. I decided I wanted my own link blog and so I built one based on the (at the time) open source Jive forum software. The site itself never turned into anything, but it got me my first Java consulting gig.

Like many people I eventually drifted away from blogs into the world of social platforms. I eventually got interested in doing Apple platform development and started looking for a good open source application to work on. I found NetNewsWire. I originally began work on NetNewsWire because the code was a good model to learn advanced techniques from. Along the way I rediscovered how amazing blogging is.

Through Brent Simmons, the founder of NetNewsWire, I learned about how useful outliners could be. I was familiar with outliners, but hadn’t used them to their full potential. I got more and more interested in outliners and eventually began work on Zavala. Through Brent, I also learned about publishing outlines as blogs.

I’ve always used outlines to do my writing since I learned about them. The hierarchal structure in writing just made sense to me. As a software consultant, I alway wrote using Word’s outline view. To me it was just natural to want to use something like that for blogs. When I heard about the history of using outlines for blogging, things just clicked.

As part of Zavala 2.0, I wanted to satisfy the blog using an outline use case. In fact, this blog post is written using Zavala.   To publish this outline, I run a Shortcut that uploads images and HTML to my Micro.blog blog. Drummer works somewhat differently. Zavala considers an outline a document that gets uploaded as a post. Drummer is designed to group multiple entries under a published date. Each entry is a separate blog post, but are all grouped together by date. It also has a publish step, but what happens, happens behind the scenes. 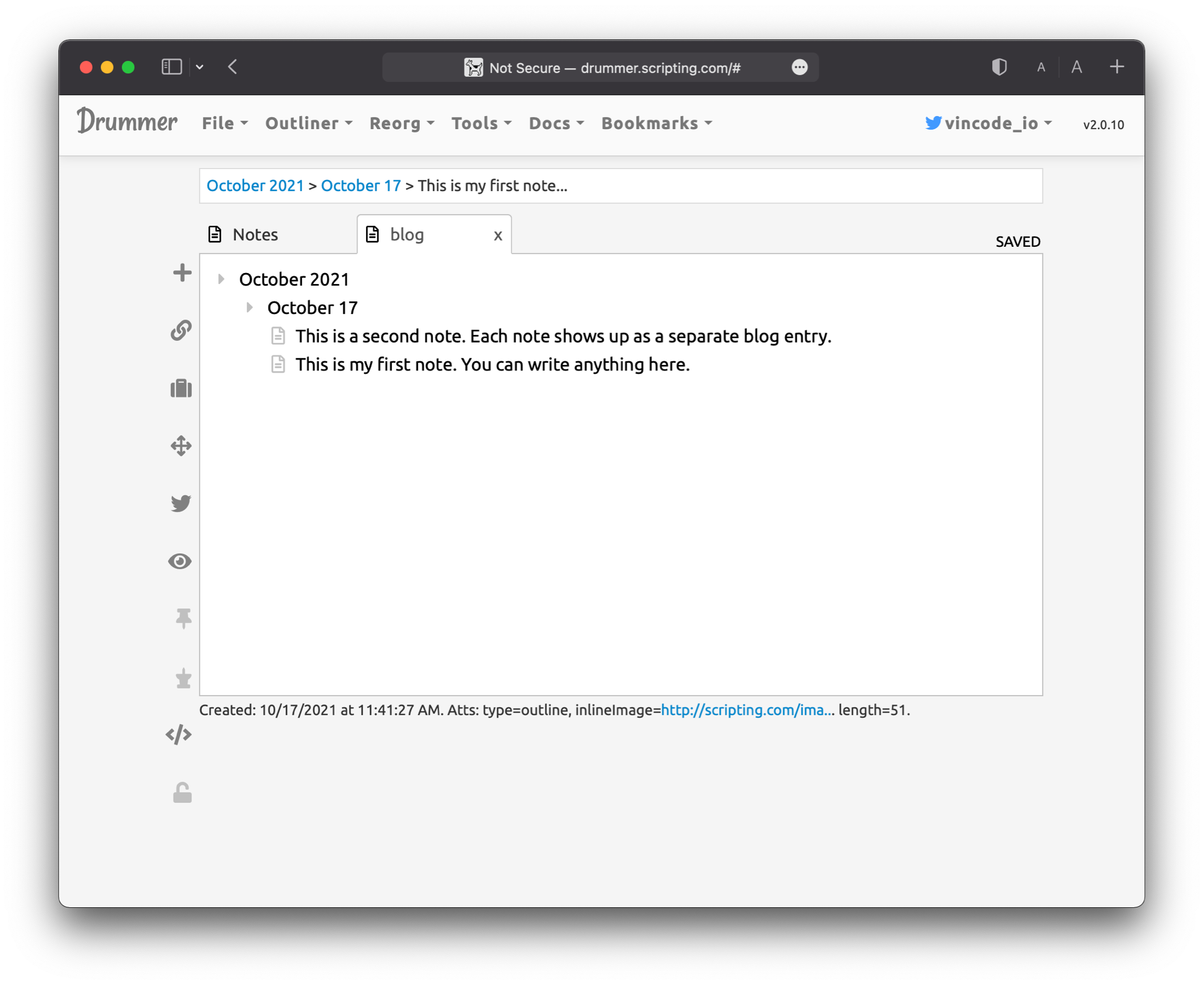   It is important here to point out some terminology differences. A “note” in Zavala is associated with a row. It provides additional detail for the topic. When publishing docs or blog posts from Zavala a topic is a group heading and a note is paragraph text.

A “note” in Drummer is a row that is a blog entry. I’m not sure what makes a “note” row different than a regular row under a date. They seem to publish the same, but the icon is different some how.

Drummer has the concept of a microblog post, which Zavala doesn’t have. This is similar to what you see on Micro.blog or Twitter. It is a short post that doesn’t have a title. If you add a child row under a row that is under a date, you get a full blog post where the child rows are paragraphs and the row is the blog title.

Drummer’s take on blogging is a little bit different different than the common definition. I think Drummer is set up well for a prolific writer or someone who posts a lot in smaller chunks through out the day. It scales up well for long posts or quick posts just to express an opinion as well through.

If I’ve sold you on blogging using outlines, check out this nice article on blogging with Drummer. You will eventually be able to do blogging on some platforms with Zavala 2.0, but that won’t be ready until early 2022. In the meantime, Drummer is something to try.

Some caveats about Drummer though. You will have to think differently if you are used to common forms of blogging. Using a single outline for all your blog entries is very different than publishing different documents as blog entries.

Drummer is also complicated in some ways. For example, adding an inline image requires you to edit a rows attributes, enter a special key, and link out to a site that is hosting your image. Drummer is new though and it is’’t like this is something that can’t be made easier in a follow up release.

I’m going to be keeping an eye on Drummer for things I can learn from it. I’ll also be looking for opportunities for interoperablility. There might be something there that can make both projects better.